Rocca di Papa (sometimes called simply ‘a Rocca in many dialects of the Castelli Romani) is an Italian town of 15,203 inhabitants in the Province of Rome, located in the Castelli Romani area, in Lazio. The Municipality is part of the Mountain Community of the Castelli Romani and Prenestini and houses the headquarters of the Regional Park of the Castelli Romani.
Although the modern town was born only in the Middle Ages, the rocchigiano territory had already been inhabited since the first millennium BC: Monte Cavo was in fact the ancient Mons Albanus, sacred to the Latins, on whose summit stood the temple of Jupiter Laziale. Some historians suppose that the legendary Latin capital of Alba Longa arose on the eastern shore of Lake Albano, largely located in the Rocchigiano area.

In the Medieval period Rocca di Papa was given in fief to the Counts of Tusculum, the Annibaldi, the Orsini and finally, between 1426 and 1870, to the Colonnas. In 1855 the Rocchigiani citizens became protagonists of the proclamation of a Republic of Rocca di Papa (Read the chronicles of the time/In Italian).

During the nineteenth and twentieth centuries, the town became internationally renowned as a popular resort just a few kilometers from Rome, hosting high-sounding names in politics and entertainment. 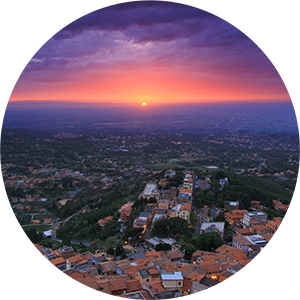 A pleasant and charming slope garlanded by the main peaks of the Lazio-Volcano which create a faboulous and natural amphitheatre. In such a terrific plain on the banks of a lake probably was located the antique City of Cabum, the city of priests that were charged to officiate religious rituals held in “Jove Laziale” temple on “Monte Albano”(Monte Cavo). In this extremely fruitful flat oxen and lambs would pasture; they were used for sacrifices on “Latinae Feriae” and minor trumphs.

As regards the etymology of Hannibal’s Fields an interesting debate is still going on: according to some scholars of the XIX and the XX century the origin of the name comes from the old family Annibaldi from Trastevere, landlords of “Molara Castle” and Montecompatri feud; they used also to rule the area for a short period of time. Yet such hypothesis seems not to be true; actually the Annibaldi or Annibaldeschi (apart from baptising those fields by adjusting their name) were only temporary owners. After them we can add that other six princely families controlled the territory. You have to consider that the noble Colonna family dominated the spot for four centuries as late as 1870. For the first time the name of Hannibal could be read on an official document dating back to 1761 in Colonna Archive; actually on the writing “PRATA DI ROCCA DI PAPA” you can notice an amendment by hand saying: ”Hannibal’s Fields“ no doubt hinting at the Carthaginian hero but surely not in honour of the Annibaldi who were their rivals and opponents.

Actually a more realistic theory is traced back to the name ”Hannibal’s Fields” at the Roman times linked to the memory of the camp not Hannibal’s but of the Roman barracks positioned over there, as Tito Livio narrates, to defend the LUCUS SACRED to LATIO JOVE in view of the obscure threat of such a mighty Army at the gates of Rome which was even formed by several elephants. They say that throughout all that long period in which these camps were garrisoned, so big was the dread and despair among the inhabitants of Cabum that were sacrificed more than 300 oxen to Juppiter. Their imagination was mixed up with the one of the Roman soldiers camped there; both of them were afraid of suddenly bumping into the frightening African General who was on the verge of threathening slaughter and depredation everywhere. So in order to satisfy their long but vain wait they called that spot: ”Hannibal’s Fields” in memory of the great Carthaginian hero.

This site uses cookies to improve the browsing experience of users Read more.