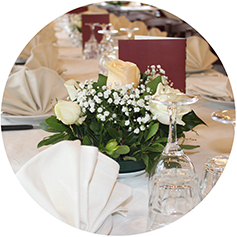 In the heart of each of us there are memories tied up to flavours and smells that bring back to our childness when we used to rejoice our senses with dishes either our mother or grandmother or women of that time used to prepare.

Hannibal’s retreat no doubt intends to let its customers share the same emotions by exploiting a sort of new approach together with modern techniques.

Great care is given to the choice of the ingredients of our recipes so that we may serve appetizing dishes to our customers’ palate.

It is a demanding challenge that only a great love for our job is able to stimulate. Yet we have not to forget the great help our father offers while cooking in the kitchen; thanks to his long experience he hands out suggestions and funny tricks of inestimabile value. 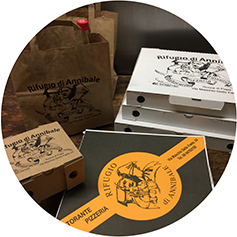 We thank you for granting your preference to our business and we look forward to seeing you at the Refuge!

Here we will be ready to welcome you to accompany with our kitchen the convivial moments with your friends and family, between the hospitable environments of the Restaurant.

From a latin verb ”pinsere” (to crush, to press) was born “pinsa” in ancient rome: a waffle similar to the present focaccia (flat bread), which contains,in only one crispy skin, a soft crumb with the flavour of ancient bread which matches antique wisdom with modern dietetics. The third millenium-pinsa is even more digestable than its wellknown foremother, since the mixture of spelt egyptian camut (ingredients used in the past) has been replaced with soft wheat flour (highly proteinaceous), soy flour, rice flour; all of them rigorously not ogm; moreover the rising “biga reversed” has created a high quality food product which, together with the deliciousness of various seasonings, is unmatched in several specific diets and digestability compared to any other products. Just as all typical foods worthy of respect, pinsa is a registered trade mark with precise preparation rules. Thus pinsa warms up again and urges the never subdued desire of the romans to recover possession of an ancient recipe sunk into oblivion for ages with the blessing of our friends from naples and of the latest pizza.

All condiments of our pizzas go well with our “pinsas”

This site uses cookies to improve the browsing experience of users Read more.